“The key issues for us as the head contractor when selecting materials for use on site include: safety; cost; time; speed of installation and availability of product; ease of handling/transporting to site and while on-site; and environmental benefits of products as the project is chasing a 6-star Green Star as-built rating”

Need help with a similar project?

Speak to a Knauf Specialist

Grocon, the head contractor for the project, were happy to listen to the recommendations of Northern Australian Contracting (NAC), the plasterboard contractor, as to how they could optimise the specifications provided for the project.

“The key issues for us as the head contractor when selecting materials for use on site include: safety; cost; time; speed of installation and availability of product; ease of handling/transporting to site and while on-site; and environmental benefits of products as the project is chasing a 6-star Green Star as-built rating”

“Knauf’s SHEETROCK® plasterboard should provide us with increased productivity due to the fact it is about 15% lighter than Knauf’s regular plasterboard. This assists in delivering the product to the various locations within the building, the time it takes to install product and the distribution of material loads in both a stored and fixed scenario.” said Grocon Assistant Project Manager, Cameron Starkey. 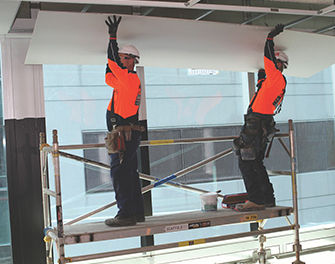 In total, approx. 30,000m2 of SHEETROCK® Plasterboard is being supplied to the 480 Queen Street project with Knauf staff working closely with NAC and Grocon to ensure supplies are delivered to site in a timely manner.

The site is located on one of central Brisbane’s busiest roads, indicating the coordination of deliveries at times when the crane can lift packs of SHEETROCK® off the delivery trucks and directly up to the Preston Decks is critical to site efficiency.

“The delivery of SHEETROCK® Plasterboard from Knauf to the site are tightly scheduled as we have to book crane time so the packs can be lifted straight off the truck up to the Preston Decks on the relevant floor. Then, our guys unload the packs and distribute them around the floor to where the board will be installed.”

“Our boys like working with Knauf SHEETROCK®. Fifteen per cent lighter* doesn’t sound like much, but it makes a big difference when they are working overhead installing ceilings as they are on the project. When carrying the board overhead, it doesn’t flex as much and is generally more stable than regular 13mm plasterboard.”

“We also find that the SHEETROCK® board is more rigid than regular plasterboard and we have less breakages, which increases our productivity.”

“Another benefit of SHEETROCK® is how easily it scores and snaps in comparison to 13mm board, it is much cleaner and results in less dust and mess to clean up after cutting.”

“What’s also important to us, particularly as our contract is D and C, is that Knauf is multi-national, it gives us comfort that they will stand by their product with warranties, on-site inspections and post sales support in general.”

“Knauf have been great to deal with on this project. They have been reliable and responsive which helps us deliver our obligations according to our contract” said Managing Director of NAC, Danny Simpson.

“Knauf is committed to delivering the industry’s most innovative and advanced products to our customers. With Knauf SHEETROCK® Plasterboard, we are delivering what our customers have been asking for” said Frederic de Rougemont, CEO of Knauf Building Products. “This product redefines the plasterboard marketplace by creating a more productive way to approach wall and ceiling board installation without compromising on time or quality” said Frederic. 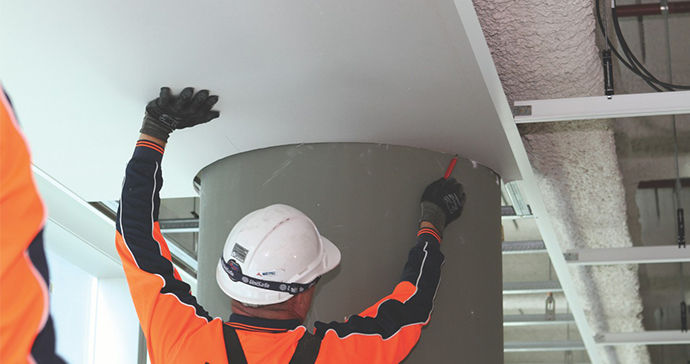 Knauf’s patented technology and innovative chemistry are key to the creation of the new plasterboard product. Knauf Sheetrock® Plasterboard features Sag-Defying- Strength™ – which is ideal for ceilings because it is fundamentally reengineered for improved sag resistance and improved strength-to-weight ratio. Sag-Defying Strength™ also helps reduce the chance of damage during handling and installation. And with a consistent core that’s easy to score and snap, this could translate to less waste and potential material cost savings.

The opinions expressed by the employees of Grocon and NAC above are the opinions of those third parties and should not be taken to reflect the views or opinions of Knauf. For more information on SHEETROCK® please visit; www.knaufapac.com/sheetrock