Need help with a similar project?

Speak with a Knauf Specialist

Knauf  is extremely proud to have been instrumental in the creation of a bespoke radial metal pan ceiling for the new purpose-built indoor and outdoor horticultural exhibition space, The Calyx, opened at Royal Botanic Garden in Sydney on 11th June 2016.

This exceptional project is a highlight for Knauf  – not just in Australia but also internationally – demonstrating the flexibility of both the product and team in successfully conceiving a ceiling that presented a considerable manufacturing and contracting challenge in both design and execution.

A unique challenge
Those familiar with Royal Botanic Garden Sydney will recognise The Calyx from its former guise at the Arc Glasshouse in the south-western corner. In visualising this new space, PTW Architects specified a ceiling with a unique curvature that needed to blend organically into the naturalistic lines of the structure. 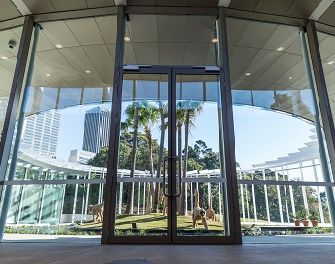 Paul Sheehan, Architectural Specifications Manager for Knauf  NSW, admits the difficulty of the project was partly because of the radius and the rake: “It meant that every single panel had to be a trapezoid shape. To get that perfect in the radius, every single bit of framing had to be millimetre perfect.”

By the time the project reached its completion, over 380m2 of Knauf  Metal Ceiling products had been installed in approximately 50 different-sized panels, a considerable feat to turn the architectural vision into reality.

Sandra Pancoe, Design Manager, Ceilings Solutions Group at USG in Chicago, USA, assisted the Australian team to meet this ambitious goal: “Initially, we ran through the details with Sandy and there were only nine panels. It meant that when we actually delivered the product, we’d have to cut the panels on-site to make sure it would all fit. The framing would be done off-site.”

As fate would have it, the field-cutting, as originally planned, was not a viable option. Sandra Pancoe suggested an alternative approach including 50 different panels for cutting off-site that, although involving additional cost, enabled the complex design and decreased the price of installation dramatically.

Vision becomes reality
The finished ceiling includes A062 panel perforations for its internal acoustic properties and flat panels on the external side. The project also features a row of flat panels at the highest internal point, as the perforated panels could not be made to the required length. Knauf ’s Fineline Grid was custom-punched to create a radius on the raking ceiling, and Celebration Metal Panels were custom-designed to suit the radius and powder coated to match the window mullions.

After a number of early morning conference calls and considerable email traffic between Knauf ’s Sydney & Chicago offices, The Calyx metal ceiling came together on-site, installed across a three-week period between the 1st and 25th May 2016. Even when one small section did not line up, the US team snapped into action, re-manufacturing the section within 24 hours and shipping it to Australia before it was even due to be installed, so as not to delay the process.

International collaboration
Paul Sheehan believes Knauf ’s involvement in The Calyx is evidence of the organisation’s ability to work as a team, with the local team collaborating with colleagues overseas despite the difficulties in coordinating time zones and delivery deadlines.

“It was a difficult project but, in the end, we got there,” confesses Sheehan. “When everything arrived on-site, it looked fantastic – right down to the colouring, which was a Dulux Shimmering Champagne colour. We sent over two colour swatches that they couldn’t match in the US, Australia or New Zealand so it was sourced from Dulux Toronto in Canada. The very first thing I did was get an off-cut and put it beside the window mullions – because all the window mullions were in and they had to match that colour – and I breathed a huge sigh of relief. That’s the level of detail it required.”

With The Calyx, the Royal Botanic Garden Sydney now has a unique, multipurpose space that is ideal for plants and comfortable for people, and Knauf  has a showpiece that makes a grand statement in terms of the team’s ability to meet challenging architectural specifications.

© 2017 Knauf . All rights reserved. Knauf  and INNOVATION INSPIRED BY YOU are trademarks ofKnauf  Building Products or one or more of its affiliates.